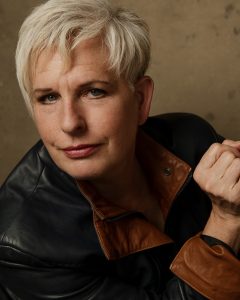 Over a thirty-five year career as actor, director, teacher, Patricia now lives in Toronto. Previously, Patricia taught Acting and Voice for Theatre at Thorneloe at Laurentian University, in Sudbury, Ontario. Patricia’s most current endeavor was St. Ella of the Camino, a one person show, which she wrote, performed and produced. The world premiere of St. Ella of the Camino marked Patricia first writing venture and was performed in October of 2019. Other recent performances in Sudbury include: Escape from Happiness (Thorneloe Theatre), Shakespeare’s Will, (Text Me Productions), Hay Fever (Thorneloe Theatre), Henry and Alice Into the Wild (Blue Water Summer Playhouse), Our Town, How It Works (Sudbury Theatre Centre), Muskeg and Money (North Road Theatre), Shakespeare’s Will (Text Me Productions) and Faith Healer (ImPulse Theatre/Text Me Productions). For Thorneloe she has directed Road, Greek, The Memory of Water, Cabaret, The Last Days of Judas Iscariot, Les Belles Soeurs, Book of Days, Hedda Gabler, Twelfth Night and As You Like It.

Her most recent film was an ongoing project that was developed in yearly chapters: Perspective, which premiered in September 2020 at Cinéfest in Sudbury. Patricia has lived and worked as an actor in Montreal, Vancouver, Toronto, Ottawa and Sudbury. She has taught Voice for Acting and Acting at University of Ottawa, York University, Ottawa School of Speech and Drama, St. Lawrence College and U of Toronto.

Measure for Measure is Patricia’s first directing project at TFS. Thanks to the creative team for going on this crazy ride, and to Hart for the opportunity.