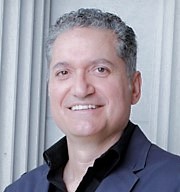 With a career spanning more than 30 years. and a wholesale-retail business that has covered Canada, the U.S., Mexico and beyond, Franco Mirabelli has distinguished himself as one of Canada’s most impressive fashion talents.

After studying design at the prestigious Fashion Institute of Technology in New York City, Franco was hired by the Anne Klein Company as a design assistant under the oversee of head designers Donna Karan and Louis Dell’Olio.

Following several years of training, Franco returned to Toronto to launch his ready-to-wear collection, FRANCO MIRABELLI, and open his first of three company stores. Designed and manufactured in Toronto, the collection quickly developed a reputation as a hip sophisticated line. The label soon landed in premier stores such as Saks Fifth Avenue and Nordstrom, and internationally in stores in Mexico, Dubai, Bermuda, and England.

Using Italian and French fabrics, Franco’s designs reflected his Italian roots, with an emphasis on luxe fabrications and precise tailoring. His signature style has been described as elegant, modern, and contemporary.

His design talents were brought in to create uniforms for the Four Seasons Centre for the Performing Arts, the Hazelton Hotel and Magna Golf Club.

Franco Mirabelli has been lauded with awards from the City of Toronto, the Italian Chamber of Commerce in Toronto, and the Fashion Group International. His work has been noted by Womenswear Daily, Vogue U.S., Ocean Drive, Flare, Fashion, Chatelaine, Canadian Living, The Globe & Mail, and the National Post.

He currently sits as the Designer-in-Residence at George Brown College School of Fashion, is a professor in the fashion department at Yorkville University, and is on the board of consultants at the Toronto Fashion Incubator.